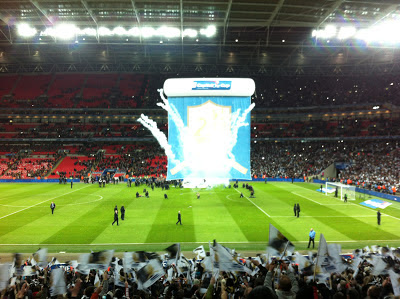 
Well it's time to relive it once again. We're off to Wembley!

For most of us it means cracking open a lovely can of beer at 7am while sailing down the M4 on a bus that smells like anticipation and (if you go with the bus company I do) a little bit of urine.

There will be plenty of beer and plenty of anticipation on Sunday. Hopefully more excitement than nerves like the last time the Swans were at the stadium. While the 5-0 hammering by Liverpool last weekend wasn't ideal preparation for Wembley, rest assured there is nothing to worry about on Sunday.

While a heavy defeat isn't cause for celebration, it does clear the air. It gives the team - the whole squad - a shake up. One thing Swansea City definitely won't do now is swagger into the final and slip-up by being too casual.

In theory, Swansea should win comfortably on Sunday. Despite no obvious striker (excluding Michu), the Premier League team should wrap this historic cup final up in the first half - again, in theory. But, as we know, the cup loves an upset and things rarely go the way we plan.

Remember, Bradford are not in the final because they have been poor in this competition. They beat other Premier League opposition (including Arsenal) to claim their Wembley spot and won't have any fears about being up against Swansea. Their fans believe, their players believe, the Dalai Lama believes, and sometimes a little belief goes a long way.

But against a mid-table League Two side, this is only Swansea's game to lose.

Michael Laudrup played a second string side against Liverpool, ensuring some of his top players were rested (some may say unnecessarily), so his strongest eleven will be out on Sunday. Laudrup is taking this cup very seriously. Let's face it, his time at Swansea is likely to be short, and he knows that if he is to go down as a Swansea City legend in such a brief time-slot, a cup final win will be the way to do it.

Tremmel will have to start in goals. Not just because he has been this cup's designated keeper, but because his overall form has increased dramatically, with some fans insisting his performances have been better than Vorm's in recent weeks.

Unfortunately, the consistent, fiery ponytail of Chico Flores won't be fit in time for the final. So, more than likely, lining up with Ashley Williams and wearing the captain's armband will be Garry Monk. He's by no means a Chico Flores, but he is the club captain and his cool head will be vital. We all know what he can do at Wembley. Most of us are still confident that, had Monk not put his body on the line for the club against Reading, Swansea would not be in the Premier League today.

Either side of the centre two will undoubtedly be Angel Rangel and Ben Davies. It will be a big occasion for Davies, but he's handled himself well in the past year in Taylor's absence and will cope with the pressure and whatever Bradford can throw at him.

Onto the usual headache in Swansea City's game-plan - the midfield. Starting with the wings, I'd go for Pablo Hernandez and Wayne Routledge. Nathan Dyer hasn't been as electrifying as he has in the past, but will be a superb little sub, should Swansea need him in the second half.

Leon Britton is first for me in the middle, and is probably your first choice too, despite Laudrup occasionally overlooking him. De Guzman and Ki would make up the other two for me.

Despite Bradford giving it their all I can't see any other result than a Swansea City win in normal time. It won't be an easy 90 minutes but Swansea will win 3-1 (though I do see Bradford netting the first goal).

It's odd, Swansea being outright favourite... there's something a little unsettling about it. Or is that just me? It's probably just me. Swansea will win.

Let's get ready to make history - see you in Wembley!