Trundling through the archives with one of Swansea's greatest

Once the hero of Swansea City, Lee Trundle continues to play the beautiful game for local side Ammanford AFC, located above the Amman Valley in the Welsh county of Carmarthenshire.

Now aged 43, the once household name of British football, Trundle is onto the 18th club of his 25-year-long career. But, Ammanford isn't exactly a football-fanatic town. In fact, deep within Carmarthen's rugby heartlands, the 800-strong crowds that the Recreation Ground boasts on most weekends is impressive.


Of course, Trundle's move in 2019 may well be a factor in this. This is especially true when considering the legend Trundle created just half-an-hour down the A483 and M4 with Swansea. With Ammanford being in Swansea's orbit, there is naturally the added pressure on local sides to find fans from somewhere when the English Championship is being played at the same time.

Born in Liverpool, it's often a wonder as to why a scouser finds his home four hours and nearly 200 miles away on the south coast of Wales. But, after turning out for non-league sides in Merseyside, Trundle finally turned professional midway through his twenties, joining Swansea from Wrexham in 2003.

Back then, the Swans were languishing in League Two - or what was named the Third Division - in the early noughties. That move changed the fortunes of both player and club as forward Trundle netted 86 times in 173 times with the Swans earning promotion to the second tier. From that, the Welsh side established themselves as a stable Championship club until another promotion in 2011 saw the Swans head to the promise-land of the Premier League.


Trundle was a massive part of this golden era, becoming a firm fans favourite with close control, incredible ball skills and impressive finishing that seemed far too good for the bottom depths of the Football League.

Naturally, every footballer incurs lows as well as the memorable highs and the striker was no different, failing to recapture his Swansea form at Bristol City, Leeds and Preston. A brief return to Swansea on loan in 2009 saw him net five times in 20 appearances before spells in the Welsh first tier and non-league saw the Liverpudlian retire at the age of 36.

Football was, and is, Trundle's life however and he continued to showcase his talent with amateur side Page Celtic in the Liverpool County Premier League as well as local pub side, The Oak Tree, on Sundays.

A real comeback was made though in 2016 when Trundle was asked by friend and then manager of Llanelli Town Andy Hill to play for the Reds. 68 goals in 45 appearances is not a statistic to sniff at, particularly when considering that the striker was now a quadragenarian. In fact, the striker hit a half-century of goals for Llanelli in his first season - including a remarkable nine hat-tricks. Yes, his opponents were usually semi-professional, but that is an incredible goal-scoring return in any league in any country.


Consecutive promotions followed with Trundle leading the line, but the striker moved on in 2018, citing the problem of travelling to teams in north Wales the reason.

Haverfordwest County was Trundle's next destination, but the location in Pembrokeshire led to struggles between games and training and work commitments at Swansea. After a brief spell at Trefelin, the striker decided on Ammanford last year where he has 12 goals in 14 appearances.


A recent knee operation limited his game time before the coronavirus pandemic obviously put a halt to all sporting proceedings. But there seems to be little stopping Trundle from continuing to play football well into his late forties, especially if the love of the game is still well and truly there, which it appears it is.

Posted by Anonymous at 14:34 No comments:

The conquistador that settled on the shores of Swansea

Eight years ago, a Spanish footballer by the name of Miguel Perez Cuesta - or Michu for short - arrived on the shores of south Wales. The rest, they say, is history.

Going into the 2012-13 Premier League season and Swansea City were tipped to struggle; following an impressive debut season in the top flight, head coach Brendan Rodgers had been snapped up by Liverpool along with Joe Allen, whilst loan star Gylfi Sigurdsson had left for Tottenham. 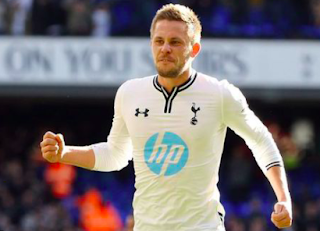 Gylfi Sigurdsson's move to Tottenham was labelled a
disaster by many Swansea fans.

The appointment of former Danish midfielder Michael Laudrup was a gamble given his lack of coaching experience in top leagues. But, nine months later and the Welsh side were League Cup champions and ninth-placed finishers in the Premier League. Whilst Laudrup deserves the majority of praise for the Swans' endeavours, one certain Spanish striker certainly made his job easier.
An unknown quantity, Michu had been the unsung hero for La Liga side Rayo Vallecano before joining Swansea. The striker - then operating as a midfielder - had netted 15 times in 37 appearances for the Spanish side, but he was to better that emphatically for the Swans. In just one season, the previously unheard of Michu, wrote his name into Welsh and Premier League football folklore.
There's debuts to remember and then there's the one enjoyed by Michu in his first appearance for Swansea in 2012. It took just eight minutes for the Spaniard to open his account for the season, placing a shot from outside the area. He went on to register an assist and a fantastic double, netting a first-time finesse in the second-half. A new four-year deal in January 2013 enabled chairman Huw Jenkins to warn off any would-be interest with a £30 million price tag slapped upon the striker's head. 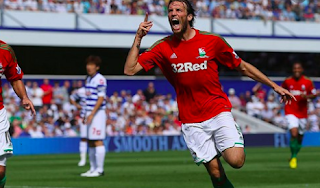 22 goals in 43 appearances rounded off the season in perfect fashion as Michu took home the Swans' Player of the Year award. In recognition of his stellar season, the formidable forward earned his first cap for Spain in October 2013. It seemed as though everything was heading in the right direction. So, how come, just two years later, Michu found himself in the third Spanish division?
Well, injuries can ruin many a footballer's career, and, simply put, that is what plagued Michu's. Injury after injury made sure that he could never maintain an extended run in the Swansea side, and, April 2014 proved to be the last time the Spaniard donned the Swans' jersey. A loan move to Napoli and then a release from his contract in November 2015 saw Michu's time on British shores cut short. 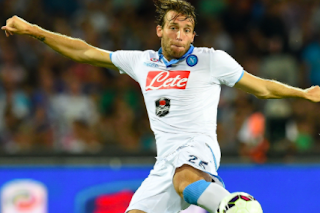 The striker went home, joining Segunda B side UP Langreo before ending his career at boyhood club Real Oviedo. Forced to retire at just 31 because of the injuries he had sustained throughout his time in the sport, Michu took up the role of technical secretary at Real Oviedo where he still remains.

Of course, the way in which Michu ended his career on the south coast of Wales was inherently disappointing for all concerned, but the Spaniard helped Swansea win their first and only major trophy, something which will always make him a hero.
Injuries are part and parcel of sport and football especially, but the way in which they cut short the career of a player that had revolutionised a city of Wales was particularly cruel.
Perhaps there's never been a more befitting phrase of "one-season wonder" than that of Michu's in 2012-13, but what a season it was. 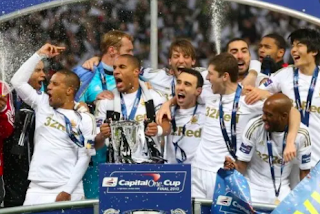 Michu was an integral part of the Swansea side
that lifted the League Cup in 2013.