Another week or so has passed - the World Cup is in full swing, the transfer market has seen some movement and Cardiff are still in the Championship. So let's see how the summer is treating Swansea City!

The Premier League fixtures for the 2014/15 season were released today. Rumors of playing West Brom at home for the first game were false - instead Swansea will play Man United again for their opening fixture, albeit at Old Trafford this time around (this will be on 16th August).

The rest of August, September and October are all pretty winnable and should give us some nice points to take into November which looks like a bit of a tough month (with games against Everton, Arsenal and Man City).

The season overall is pretty well balanced between tough and not-so-tough teams. Hopefully survival in the Premier League will be sorted before May as the Swans will face both Arsenal (away) and Man City (home) in that month. The final game is on 24th May with an away trip to face Crystal Palace. The full list can be found on the Evening Post's website.

There's not been much in the way of transfer activity over the past week. At the moment the biggest news is that the Swans are pretty close to signing an old face - Marvin Emnes - for around £1million. The 26-year-old has been with the club on loan twice over the past few years and, although he's nothing groundbreaking, he offers another decent option up front and is already a firm fan favourite. And, let's be honest, £1million is a bargain!

Wilfried Bony has said he will only leave Swansea for a top six club, which - I guess - is fair enough, even though we hope it doesn't happen this summer. It may/will definitely be difficult for the club to keep hold of the star striker in the long term, but if he does go it will be better to see him with Arsenal or Chelsea, not Stoke or Sunderland.

Meanwhile the question mark still hangs over Ashley Williams' head, but all this talk from his agent smells too much like a tactic to increase his wages rather than an actual threat to go elsewhere. Another 'watch this space'!

The World Cup is only a week old, but it's already been a fascinating tournament. And Brazil - home to the Copacabana, the Rio Carnival and the BSOP - is the temporary home to some of Swansea City's stars.

Wilfried Bony popped up to score Ivory Coast's first goal in the 2-1 turnaround against Japan, with a glancing header after latching on to Serge Aurier's cross in the second half.

Meanwhile Jonathan de Guzman played around an hour of Holland's thrilling 5-1 hammering of Spain (even if he looked a little out of his depth at times). Michel Vorm was on the bench for the Dutch for that game, but with Holland having no set number one, don't be surprised if we see him at some stage in the tournament.

In South Korea's 1-1 draw with Russia last night, Ki Sung Yueng showed the kind of midfield passing and domination that, had he shown more of in his first season with Swansea, may have seen him avoiding that loan spell at Sunderland. Either way, he looks like a player Garry Monk - and the Swans fans - will want to keep hold of.

More from all these players in the next few days (including de Guzman tonight hopefully)!

Finally, the Swans look to have agreed a new shirt sponsorship deal with the company with the almost unreadable logo, GWFX (the Goldenway Global Group).

It turns out to be the biggest shirt sponsorship deal in Swansea City's history, supposedly worth more than £4 million to the club. Good business there, even if I do hate that logo! 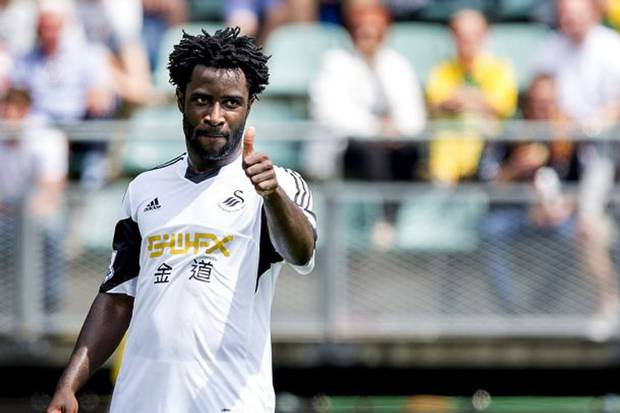