As Premier League football stopped for a week, I took my own international break. A long flight to America gave me the perfect opportunity to catch up on some reading (and drinking from tiny cans of aeroplane beer). But what book was I to read to pass the time?

Since Swansea City have gone global, I've received quite a few emails from new Swans fans around the world. One question that crops up time and again is 'what are the best books to read about Swansea's history?'

Usually - pushed for time - I will just say 'check the official Swansea City history page'. I usually feel a little guilty for not being able to recommend something specific. So I decided to check out a history book - one that can bring anyone up to speed on our exciting football club. 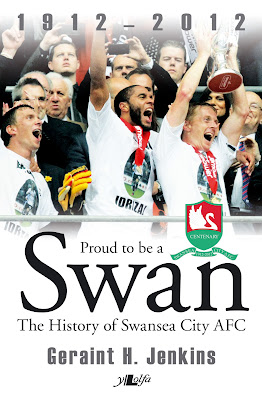 Looking towards new releases I picked up a copy of "Proud to be a Swan: The History of Swansea City 1912-2012"‏ (y Lolfa), by a man who is both a historian and (most importantly) a Swans fan - Geraint H. Jenkins.

The book appealed to me because it seemed to offer the chance to learn everything about Swansea City from the very beginning, without having to dive into the library for prolonged periods (something the author clearly did).

It reads more like a novel than a history book, which is appropriate considering the almost fictional history Swansea City have written themselves. Much of the waffle sometimes associated with history books is cut out - what's left is a highly readable journey through Swansea's history.

Over the 186 pages, we read about the events leading up to the formation of the club and the first glory days of the mid-20s, where Joe Bradshaw reigned over players like Joe Sykes and Jack Fowler. Those were the days where the Vetch was bursting with fans shouting 'hurrah', while the players won the club's first trophies with attractive, passing football similar to the Swansea City of today.

We hear all about the various highs of the club, including trophies won, superstars developed and promotions secured. Of course, with the highs come the lows, and these are also all well documented - from the wartime years and wavering support to relegation scraps, and even a gruesome death.

Thankfully the book is very up-to-date, with the inclusion of our most recent manager upset and the recruitment of Michael Laudrup. Basically, if it happened in the past 100 years, it's likely to be in the book.

Add two high quality photo sections and a foreword by Swansea genius Huw Jenkins and you have a very readable history book.

So, as Swansea City step into the next 100 years of being South Wales' favourite football team, it's safe to say 'Proud to be a Swan' has punctuated the last century superbly.

You can buy the book here!