From Oldham to Old Trafford: The Rise of Angel Rangel‏

He's my favourite player. No, not Alan Tate - it's Angel Rangel. And MATTHEW JACOB, in his ForzaSwansea debut, profiles the Spanish defender who continues to dominate the wings of the Premier League.

Swansea City have been on an incredible journey in the last ten years, and many have played their part in the meteoric rise of the club. Were you to ask the Jack Army who they think has been a standout performer you may hear names such as Ashley Williams, Leon Britton, Scott Sinclair, Michu... only a few might immediately suggest Angel Rangel, but the Spanish full back has been a stalwart since his arrival from Terrassa in 2007. 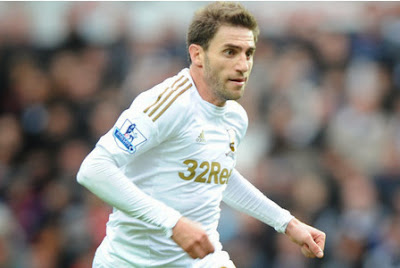 I remember my initial reaction being one of incredulity - I mean, Angel Rangel?! Who is he?! I learned soon enough. For a mere £10,000 Rangel was brought to Swansea from the Segunda B outfit on a performance-based deal by Roberto Martinez, and quickly established himself as a first team regular as Swansea stormed to the League One title.

Rangel continued to perform well as Swansea's passing style drew admirers from all corners of the football world, culminating in a Wembley showpiece and promotion to the Premier League. An extraordinary rise then for a player plucked from obscurity in the lower echelons of Spanish football.

Rangel has had an exceptional six years at Swansea City, forging an excellent understanding with the likes of Nathan Dyer and more recently Pablo Hernandez. His rampaging overlapping runs from fullback cause havoc for opposition defences and allow the midfield even greater freedom when the Swans get into an attacking flow.

Defensively Rangel has proved himself time and again. The likes of Eden Hazard, Nani and Aaron Lennon have had little or no joy against the man from Catalonia, and his recently penned three-year deal is just reward for a string of high quality performances.

So what makes him so important to Swansea City?

First and foremost Angel Rangel is an intelligent footballer. In modern football it's as much about positional play and how the game is read that make good defenders great defenders. Rangel knows when to get tight to a tricky winger and knows when to stand his ground. As good in the air as he is with his feet Rangel has developed into one of the most highly rated fullbacks in British football.

When Rangel gets into attacking positions his ability to pick a pass and set up scoring opportunities for the forwards is another important commodity for the club. And that really is one of Rangel's greatest quality is that he's not 'just another defender' he's a winger, a fullback, a leader and a team player.

If I had to choose a Rangel moment in the last six years it would have to be his goal at Doncaster Rovers in the Championship. With the clock ticking down the Spaniard rescued a point for the Swans to keep their promotion push on track as he controlled a pass from Kemy Agustien before firing into the top corner on the volley to the joy of the travelling fans behind the goal.

Brendan Rodgers actually referred to that point as "the most important to date" at the time - a superb goal from an unlikely source, and he's chipped in with a few more since!

Rangel's influence extends beyond the pitch. The Spaniard, who recently referred to himself as 'feeling like a Welshman' is a model professional and a role model for the younger players, while recently he took to Twitter to request help from his followers to find a charity shelter where he and his wife could make food donations. The story spread and even attracted national press coverage.

Angel Rangel sums up everything that's good about Swansea City at the moment; hard work, pride, passion and belief. I'm looking forward to watching his rampaging runs for a few more years yet.