Whether you're hungover from the rugby or - more than likely if you're reading this - the FOOTBALL, wake-up and put the espresso machine on, it's time for our weekly catch-up.

A bit of a frustrating game, but one with plenty of positives.

Sunderland scored the first goal in the first-half, thanks to a solo effort from Jermain Defoe, who literally cut straight through Swansea's flustered defence and deservedly hammered the ball past Fabianski.


But a wonderful diving header for the newly returned Ki Sung Yueng made it all square in the second half. Ki was a great presence on the pitch yesterday and deserved to be man of the match. However I was impressed with Kyle Naughton at times, while Jack Cork looked well at home in the centre of the pitch.

Federico Fernandez was pretty solid all game too. Nathan Dyer had spells where he looked like the Dyer of old, although he's just not as consistent as before. A mention must also go to Nelson Oliveira, who came on and looked very keen. I'd like to see him start against West Brom on Wednesday as Bafetimbi Gomis really isn't doing it for me.

But I can't be the only one to notice this? Yes he's committed his allegiance to Swansea (for now...) and he's certainly upped his work rate, but he never looks like he's going to score. He's no Bony (I'm done stating the obvious now).

A small news item about former Swansea City star Scott Sinclair, who said he would now 'think twice' about leaving regular football to sit on the bench for a bigger club.

I'm not sure why it's taken him that long to realise, but at least he does have some career awareness. He was a big talent for Swansea, but he's basically starting from scratch again... let's hope it works out for him at Villa (apart from his away days at the Liberty).

The transfer window closed on February 2nd, and - despite all the transfer rumors around - nothing really happened with Swansea on the final day. But then why would it? We had a busy enough month of ins and outs, so there was little need to panic buy in the final hours.

The biggest news for the Swans in the window was, of course, the departure of Wilfried Bony, who left for Manchester City for around £28million at the start of the month.

But the club used a little of that cash to bring in a few new faces, with the biggest signing probably being Jack Cork from Southampton for a rumoured £3million. The previous week Kyle Naughton arrived from Spurs for an eyebrow-raising £5million. He's perhaps less of a catch than Cork, but he will give Rangel some much-needed competition, as he showed yesterday.

The Swans also secured Nelson Oliveira on loan from Benfica earlier in the window, but he's not been able to make much of an impact during his limited time on the pitch. As I've already said, it would be nice to see him make a start or two.

And finally Exeter City midfielder Matt Grimes came to the club for £1.75million - the youngster is a decent prospect, but definitely one for the future.

Last Wednesday, Garry Monk celebrated his one year anniversary as Swansea City manager. And he's done a great job. Of course he's made his fair share of mistakes, but he's also enjoyed his moments of genius and has pretty much led Swansea to Premier League safety with most of the season to go. 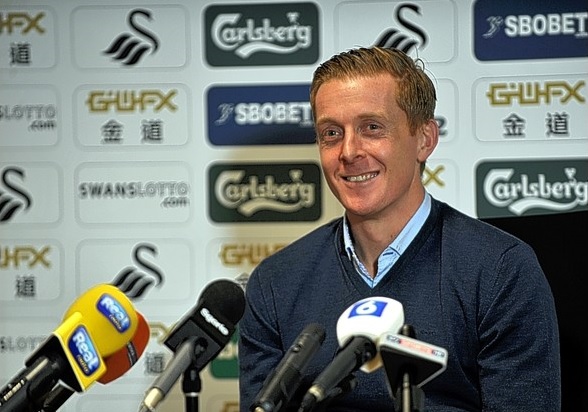 Doesn't it seem like yesterday that the club was wrapped up in rumours and controversy as Michael Laudrup was sacked? Hang on... that means that today - February 8th - is the one year anniversary of that glorious 3-0 win against Cardiff City!

Read all about that epic Cardiff City match in Swansea City's Greatest Games - the city's best-selling sports book of 2014!