Another Sunday, another cup of coffee, another Swans catch-up.

Swansea were certainly the better team in the first half of their second home match in a row; probing Everton and almost coming away with a couple of things.

We saw a stunning shot from Bafetimbi Gomis which was tipped away by Tim Howard, although it caused an unfortunate hamstring pull, with the striker leaving the field soon after. Shelvey had his own excellent half-volley goal, which was disallowed due to an apparent foul in the build up by Wayne Routledge.

Unfortunately it took just one smart move from Everton to conjure up their first real chance and - with it - their first goal, coming from Aaron Lennon in the 41st minute. Their confidence grew tenfold after that.

In the second half Swansea managed to equalise from the spot through Jonjo Shelvey with 20 minutes to go, after Seamus Coleman handled the ball while on the floor in the area. Gylfi Sigurdsson saw his well struck free kick punched away by Howard in the latter stages, but the game finished 1-1. Still no league win against Everton, but an entertaining match which probably ended fairly. (Find a full minute-by-minute round-up here).

After his 10th yellow card of the season in yesterday's match, Neil Taylor will miss the next two matches.

With Tiendalli out on loan (see below...), who will fill his boots for the away games against Leicester and Newcastle?

With six games left in the season and Spurs well off form, there's no reason Swansea couldn't catch up. Of course it'll take a great run from the Swans and, while a top six finish is almost certainly out of the question, this season - providing Liverpool finish 5th place and win the FA Cup - 7th place in the league would be enough to grab a Europa League spot.

Although this brings up the question: do we really want to be in Europe next season?

It seems Middlesbrough fans now understand what Swansea fans feel when watching Dwight Tiendalli. He made his debut for Boro on Monday, when they lost 2-0 to Watford. Boro fans weren't pleased with their new acquisition, taking to Twitter to vent their frustration over his positioning mainly.

The defender was subbed after 63 minutes in that first game, and didn't feature in yesterday's 2-0 win against Rotherham (not even on the bench).

I'll leave you with some comments from a Tiendalli Twitter search... 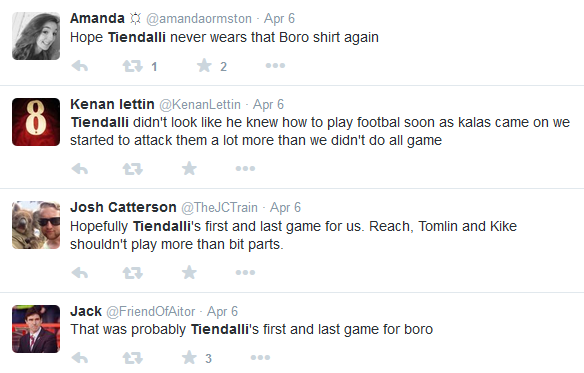