There are not many Sunday's remaining this season and as you read this Swansea are hours away from kicking off their penultimate game of their 2014/15 campaign against last season's Premier League champions (...unless you got up too late and have missed the match, in which case Swansea won 6-0!)

Either way, grab your cleanest cup, fill it with the strongest coffee and read about what's been happening this week at Swansea City.

While there's one fixture left after this, today is the final home game of the season. And what a way to end, with the chance to cause the second big upset in a week against second place Manchester City.

I had a good feeling about the Arsenal game and was right - Swansea defended like hell and came away with a well earned three points, taking full advantage of the new goal line technology.

At home against the big spenders who are more clinical it may be a tougher ask, but a draw is surely not out of the question. My prediction for today is 1-1.

The biggest talking point will probably be if a) we see Wilfried Bony take the field, and b) if he scores. He's said in a recent interview that he wants to score against his old club - let's hope that doesn't happen (although I have put a few pound on Bony to score last... just in case he grabs the winner).

It looks like the popular, but certainly not Premier League-confident Gerhard Tremmel will be leaving the club in a few weeks as his contract runs out.


There's little chance he'll stay as the Swans have apparently lined up the 25-year-old Swedish international Kristoffer Nordfeldt as a replacement.

Whatever happens we'll always remember the huge part Tremmel played in the Capital One Cup success of 2013 - undoubtedly his greatest period with the club.

It seems Mark Lawrenson finally admits he was wrong about Swansea. This week he was reported as saying that the Swans had 'stuck a pie in his face' after constantly predicting failure for the club.

His predictions, like many pundits, were based around the departure of Wilfried Bony in January, with Lawrenson expecting Swansea to 'sink like a stone'. But, in his own words...

"[Swansea] have done the opposite and have gone higher than probably even they thought possible, with a top-six finish within their reach. That is very different to their position in the league table based on my predictions. By some distance they are the team who I have been the most wrong about, so I am sure their fans will be pleased rather than annoyed that I am going to tip them to lose again on Sunday"

Ten years since the Vetch

Last Monday (11th May) marked a decade since the Vetch closed its gates for the last time, following the FAW Premier Cup win against Wrexham in 2005. Just in case you didn't know. 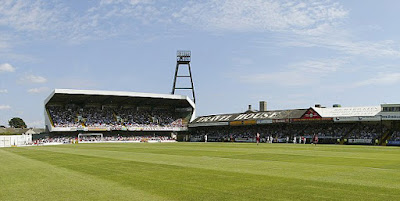 Have a look at this Swans website for some great nostalgic photos of the Vetch!