It's time for the second installment of our new weekly feature...

After a poor performance last week against Norwich, Ashley Williams looked more on form. He committed himself to tackles and put his body on the line more than once. He also handled the threat of Lukaku well. And we must thank him for not gifting the ball to the opposition, which usually results in an away goal. 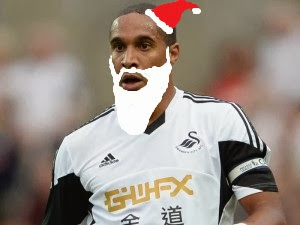 Elsewhere the singing Swansea City fans were on top form as they belted out some thoroughly entertaining songs - mainly Cardiff bashing - which we all enjoyed. "Vincent Tan is a Jack, he hates Cardiff!"

This may seem a little harsh as he scored Swansea's only goal of the game, but Dwight Tiendalli was pretty non-existent for much of the game. He didn't close down or run back quick enough and looked fragile in the air. I'd prefer to see Taylor work on his right-back skills and have a go at filling in for Rangel now and again... 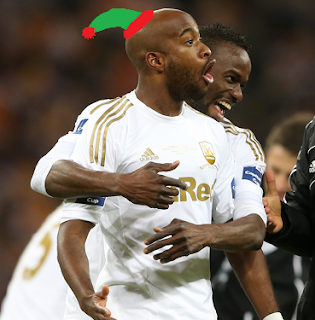 And Wayne Routledge didn't look too hot yesterday. While he had a few decent runs and slid through a nice ball for Bony, his overall game is well short of where he's been in the past and he looked quite uncomfortable at times.

Agree or disagree with these choices? Let me know your thoughts in the comment box below, via Twitter (@ForzaSwansea) or on our new Facebook page.
Posted by Chris Carra at 14:20 No comments:

We don't have many regular features as such on ForzaSwansea, so I've decided to remedy this problem by - you guessed it - introducing a feature or two!

The first one, which will be written every Monday, is called "Flying High / Clipped Wings", which is essentially a hero/zero of the week. A hot or not. You get the idea.

So, without further babbling...

After another "game of two halves" yesterday against Norwich, not many Swans players were worthy of rapturous applause. However, thanks to his effort, flair and - of course - his determined goal, Nathan Dyer impressed me (up until his unfortunate injury). Thankfully it seems his ankle isn't fractured, as we first thought. While still painful for the little man, it means he should be back much sooner.

Elsewhere Jordi Amat had a good game. He's getting more and more assured with each match he plays and soon it'll be him instead of Chico who is one of the first names on the team sheet. He seems a lot more calm than Mr Flores. Not as good an actor, but you can't win them all...

Even the best have bad games, but Ashley Williams has had a few blips recently, whether it's giving the ball away or... giving the ball away. As he's usually one of the last men, when he loses the ball it often results in a goal for the opposition or, at the very least, a good chance for them to take a shot, as we saw yesterday when he was out-muscled by Gary Hooper just outside the box. We must commend him on the superb pass to Dyer which set-up the Swans goal, but otherwise Williams isn't on top form at the moment.

And our usual super-keeper Michel Vorm looked a little flustered yesterday. While he made a cracking save to deny Hooper a winner later in the game, he gave Norwich a good chance to take the lead when his unnecessary punch went askew. Let's put it down to his knee injury.