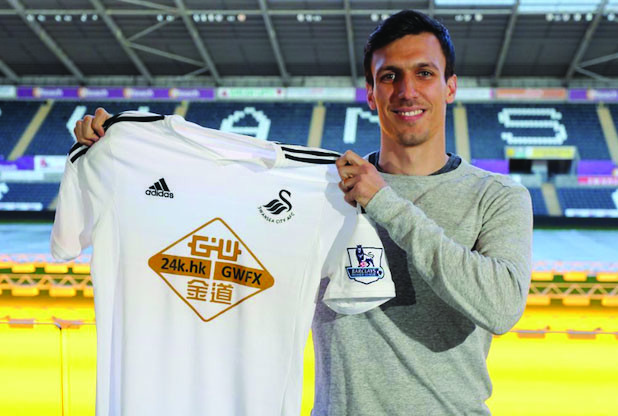 Hungover? Good - it serves you right for drinking that final beer last night.

Anyway, it's Sunday morning so grab a cup of coffee and settle your stomach by catching-up with some of the Swansea City news from the last week.

As always we'll start with the most recent game, which was an FA Cup fourth round tie against Championship side Blackburn Rovers at Ewood Park.

Unfortunately after just six minutes every Swans fan was shouting 'are you f****** joking?!' as Kyle Bartley was shown an early red card - not so much for the referee's decision, which seemed correct, but because it was another red card for Swansea, leading to yet another uphill climb from the off.

Gylfi Sigurdsson uncorked a beautiful shot in the 20th minute to give Swansea the lead, but that was quickly cancelled out by an equaliser from Chris Taylor, who capitalised on poor defending in the box.

In the second half, the home side extinguished any suggestion of a Liberty Stadium replay with a second and third goal (from Rudy Gestede and Craig Conway respectively). Then Sigurdsson was sent off for a stupid foul, leaving nine man Swans side to see out the final few minutes. Makes for grim reading doesn't it?

Garry Monk had called for a reaction from the players after the Chelsea hammering, but that clearly didn't help. Everything looked sloppy and a couple of players didn't seem like they wanted to be there, which brings me on to my next section...

It's been a while since Swans fans have been this riled up at a player. Yes Itay Shechter was dreadful and Michu was moody, but no player has been quite as full of themselves as Mr Gomis.

And it seems to be unjustified arrogance from the striker who hasn't particularly shone in a Swansea shirt, scoring just four goals in 23 appearances. He's 29-years-old, an infrequent international and - although capable of being good - he's not backing up his talk with any action.

Gomis wanted to be the starting striker but, due to Bony's great form and the fact Swansea only ever play one striker, it wasn't going to happen. Of course, no-one knows what promises were made to him originally, but now - with Bony gone - the Frenchman has his chance to impress.

Regardless of his disdain for the club, it seems that Monk has seemingly warned Gomis that he won't be leaving Swansea this month anyway, so he might as well settle in, keep his head down and try to score some bloody goals!

Kyle Naughton is now officially a Swansea City player. The surprise move resulted in a £5million bill from Spurs, and a right-back who hasn't particularly wowed during his time at the Premier League top six side, leaving a few Swans fans scratching their heads.

However, he will provide a new option at the tricky right-back position. And he's competition - not just cover - for the likes of Rangel and Richards, which can only be a good thing. Naughton didn't feature in the FA Cup match at Ewood Park (lucky him), but no doubt we'll see him on Sunday against Southampton.


We're in the money!

Earlier in the week it was reported that Swansea City are now in the top 30 wealthiest football clubs in the world. The Swans ranked an impressive 29th in the list, with a revenue of £98.7m during the 2013/14 season, making them the first Welsh club to make it into the top 30. It's nice to end this article on a positive!