THE unrest that shrouds Swansea City over the summer is now almost a tradition. In this article ForzaSwansea blogger ALEC JOHNSON takes a look at the current situation and outlines potential Laudrup replacements, should the worst happen.


It’s summer and that means another media assault on Swansea City. Let’s have a look at the facts surrounding the uncertainty within our club.

It is impossible to criticise Huw Jenkins and his team - they have collectively transformed the fortunes of the Swans, risking so much yet remaining private in their ambitions with the beautiful line "it is our duty to the people of the city". You’ve got to love this.

However we do need a summer of love not this perennial challenge of departures and mayhem.

Firstly, I find it strange that the people responsible for player recruitment at the club take holidays the second the season ends. During my days as a football agent I found that May is the second busiest month of the year and requires constant attention. Taking a holiday in late July seems like a sensible option as we always seem to be playing catch up, even though we do it very well.

The statement from Huw Jenkins last week was again very polished and honest, in the face of the media he gets better and better and deserves huge credit. However as a leader of people, running a business with revenues exceeding £70m, surely there is a feeling that relationships should be stronger internally. Successive managers have run for the exit at the first option with Wigan and Leicester hardly being the greatest attractions - deeper relationships create stronger bonds. 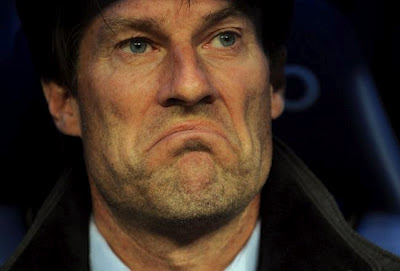 Laudrup is also known to be a quiet and infrequent communicator and this had led to recent comments being taken out of context. It is a statement of fact, not opinion, that we need to spend £200m to improve on our position. That is a fact and impossible to disagree with. What Laudrup wasn’t saying was "I need £200m or I’m off" which is the warped interpretation from certain sections of the media. His frustration lies in the pace of the activity to date with a provisional list of five players close to being closed off yet only Canas signing, not the budget.

It’s a risky game delaying closures at this level as little Swansea City cannot compete with three quarters of the clubs in the premier league. Our ‘home bargains’ happy shopper approach - which has served us well - can only go so far under the radar, the key to its success being getting business done early.

In spite of all of this, I do believe that Laudrup will stay for one more season. But, let’s consider plan B as there is deep level of uncertainty from within the club, not just the media onslaught.

Zola is a serious contender and fits the profile but had a rough ride at West Ham - can he cut it at the highest level? I believe so. Would he come here? He’d be mad not to as I cannot see another Premier League club giving him the opportunity anytime soon.

I had the privilege of speaking with Gus Poyet weeks after he was unsuccessful in his previous application at Swansea. His words: "I called my wife and said that I had found a perfect job for this stage in my career and that the Swansea chairman will be easy to work with, only to find out the next day that Sousa had the job". He was genuinely gutted. The reason then and the probable reason in future is that Poyet's family refuse to move outside London and this doesn’t go down well at Swansea. Nor should it.

I have always admired Roberto Di Matteo, a Champions League winner just twelve months ago and now scrapping around for media work. It is considered that a level of personal baggage is attached to this fella and I cannot see any legs in this.

So what about Morten Wieghorst? The second he arrived I tweeted that this is a ready-made replacement for the big man. The feeling is that he is a top class coach and is being groomed for a top job.

Anybody else? Certainly not in this country - previous contenders like Dean Saunders and Paul Tisdale have seen their stock plummet. The only other contender within profile is Eddie Howe, back at Bournemouth and doing magic for a second spell. Surely this is a step too big, too soon but his moment will come.

So, assuming the rottweiler named Bayram Tutumlu [Laudrup's agent] doesn’t get his way none of this will be necessary. Many will say that none of this should have happened if a few people had handled a few matters very differently.

Feel free to vent your feelings on this situation below or tweet @71_alec for a discussion!