After last weekend's match, ForzaSwansea's favourite American Swans supporter JACOB CRISTOBAL somehow found himself on BBC Radio's Sports World talking to presenters about the Swans vs Spurs match (you can listen to it again here). However his connection dropped out as he was asked a very important question - a question he attempts to answer in this blog post!

If you listened to my broadcast last weekend you will know I was presented with a question of what would/could Swansea City do with “Gareth Bale money.” But before I could answer the question, the connection dropped off. Hey, it comes with the territory of calling from some six or seven time zones away. Coincidentally it did create the narrative that my brief appearance on worldwide radio ended on a cliffhanger. So the question remains - what would I do with a £150 million budget at Swansea City?

Before we jump into the money pit, take note that my approach to this question involves fantasy signings and some general practicality. £150 million to spend is indeed a lot of money, but it’s still not buying you the Lionel Messi, Cristiano Ronaldo and, now, Gareth Bale's of the world. Yet you can still pick up a lot of talent with that much money. Or Itay Shechter 150 million times over. 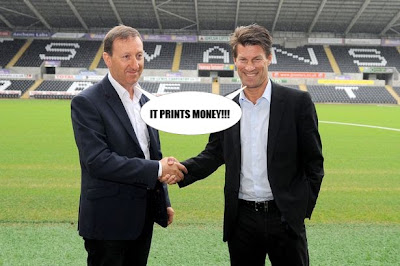 So if the Swans were given that much money with the current squad as it is, here’s what I’d do:


For me, this is priority number one. I say it because lightning is just not going to strike twice (or is it thrice). Swansea were lucky to continue the climb to where they are after Roberto Martinez became the architect and Paulo Sousa and Brendan Rodgers followed in suit. Yes Rodgers guided them to promotion and in the first year, didn’t become a one and done. He leaves and we then get Michael Laudrup, only one of the greatest midfielders of not just his generation, but all-time. He only improves on what the previous guy did and guided the Swans to European competition. Maybe there is another manager that can easily come in with their own Midas touch, but I’d rather not take that gamble. Add whatever zeroes are necessary to his paycheck and keep him happy!


I’m a firm believer in that ideology that no player is bigger than a club. But Michu is sure going to be (if he isn’t already) the offensive spark for the club. I want him to be wearing the Swansea shirt as long as possible with the only exception being his personal dream of going back to his local club Real Oviedo where it all began and retire back home playing in the top flight of La Liga.


Swansea City need a strong holding/defensive midfielder. As you saw in the match against Spurs, their midfielders out-muscled Swansea’s. Capoue smothered whoever had the ball and that’s what I’d like to see Swansea have. Your Marouane Fellaini’s of the world, or if you could do some reverse-ageing and get Xabi Alonso a couple years ago. If I may go local flavor here, Osvaldo Alonso of the Seattle Sounders FC would be great. Hands down one of the best box-to-box mids - he will come at you hard and fast and take that ball away from you.

Another fantasy name on my list, one who would probably cost a good deal of that £150 million is Paul Pogba from Juventus. I don’t think I’m telling anyone anything new in terms of the potential he could very well reach while under such tutelage as the legendary Andrea Pirlo.

Remember in January the bookies had Swansea pegged to land the services of one David Villa? From 2010 to 2011 he was unstoppable and only a fool wouldn’t want his killer long shot. I could watch this goal over and over. I am always going to rate El Guaje and nothing short of him committing a major, violent crime is going to change that opinion. With that huge sack of money, I’d resurrect that rumour and turn it into reality!

This next name is strictly based on the fact that whenever I can afford him in FIFA he’s been nothing but gold. Adryan over in Brazilian side Flamengo is a teenage mid/attacking mid who, if you play regularly in the game, progresses very well. It got to the point that I was rejecting offers from Barcelona for his services at four, five times the price I got him. I’m not sure how Laudrup and Jenkins view Brazilian talent but in my fantasy scenario, since there’s plenty of years ahead of him, you can ease him into the system and first team.

Now - a gamble... Fernando Torres. That’s right, I’d take a flier on Torres. Here’s why. Ever since he made the move to Chelsea, people just cannot seem to let go of the running joke: “OMG! HE DOESN’T SCORE ANY GOALS! WASTE OF MONEY LOL!” - those jokes are just so tired now! Like it or not he has a spot on the Spanish national team and they don’t just give those out to anyone for just showing up with a smile. I’d be that guy who’d take Torres and at the presser, tell people to back off because I still rate him as an effective player that could fit well into the Swansea system and take some pressure off offensive threats like Michu and Bony.


Outside of those major-name moves and picking up various cheap talent to round out depth, I’d put the bulk of the money into developing Swansea’s own La Masia. Hell, if the club already has the nickname of Swanselona why not go all out and invest in resources to develop a youth academy like the Catalan giants have? If that academy could produce even half of the alumni La Masia has over the years, that’s still every worth dime spent on it.

The business model Swansea City have utilised is the ultimate light at the end of the tunnel for all those clubs in various depressing levels of financial plight, so this would only be another notch to claim that the club is doing it right.


£150 million is a lot of money and acquiring some of those marquee name talents will take a big slice of that pie. Yet I think such a sack of money would honestly have Laudrup and Jenkins confused as to what they could do with it. I know they wouldn’t just piss it all away and let it negate the hard work they’ve done to get where they are in the present. The years of hard work now sees them playing in Europe and making full efforts to stay in the Premier League. Stable and continued success could very well see them making savvy moves that translate to a club that operates and brings in quality players like they’re one of the big boys with a £150 million budget every year.

Still if that magical, giant sack of money showed up at the front door of the Liberty Stadium I fully offer my services as to how to use that money!