He puts his body on the line for Swansea City week-in, week out: Ashley Williams. While the captain of Wales has suffered periods of poor form in recent months, there are few others that make it onto the team sheet before he does. To celebrate our captain, ForzaSwansea blogger MATTHEW JACOB brings us a passionate tribute.

And back then, when the Swans were in League One, even the most optimistic fan could not have anticipated the player we had just acquired. It took £400,000 to bring him to South Wales - a club record fee at the time - yet Williams has repaid that sum ten times over. 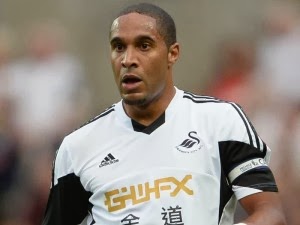 Ashley Williams was born and bred in the West Midlands and began his career at West Bromwich Albion in the youth set up at the Hawthorns. Yet like so many footballers his age Williams was released at sixteen having failed to convince the hierarchy at Albion that he was worth a senior contract.

The defender slipped into non-league football, plying his trade at Hednesford Town and working part time at Drayton Manor theme park to make ends meet - humble beginnings for a man who now proudly wears the captain's armband for club and country.

He eventually moved on to play for Stockport in 2003 and made his international debut while captain there, finally moving to Swansea City in 2008 initially on loan. Then on clinching promotion to the Championship under the leadership of Roberto Martinez the move was made permanent.

Williams is an imposing figure. At six foot tall, his broad shoulders carry the hefty expectations of the Jack Army. My first impression was how mobile would he be? He stood enormous, even at 24-years-old when he first joined the club. Thankfully that concern was driven from my mind as Williams conquered all who came against him as Swansea took the League One title and then stood firm in their first foray into the Championship.

It's hard to nail down Williams 'strength' because he's such a complete all round defender. A strong mental attitude and bravery, coupled with pace, physical strength and tactical nous - Williams possesses all of these traits. Most importantly he's an excellent footballer in defence, but he also has an attacking attitude towards the game, namely his ability to play superb cross field passes to the wingers and the obvious threat he poses from set pieces.

Williams has courted the attention of top clubs since our arrival into the Premier League and following the end of the 12-13 season it seemed Arsenal would make a move for the Welsh international. To the delight of the Jack Army no offer materialised and Williams remained a Jack.

But it's not just on the pitch where he shows dedication and selflessness for the cause. He uses his status as a professional footballer for the benefit of others and is often commended for doing so. One example is WillsWorld, the charity he started to benefit under-privileged children with his wife Vanessa, along with his community soccer schools which are very popular with children in Swansea.

He commands the respect of the crowd and his team mates. When Williams is absent you cannot help but feel our cause is weakened. But with him Swansea always have a chance. With the current rough patch we are going through, the Swans will need the influence of Williams more than ever if they are to remain a Premier League side come May.

The story of Ashley Williams is one of a man cast into the football wilderness, rising to lead a club that were faced with bankruptcy and relegation into non-league a little over ten years ago. He now battles for Swansea at grounds like Old Trafford and Stamford Bridge and typifies our bold playing style and bravery against the odds.

Let us hope he continues to lead the club for many years to come.

You can pick up Ashley Williams' book, charting his first year in the Premier League. It's available in all good book shops and online.