RESULTS: Swansea City Team of the Season (so far)

A week or so back I encouraged you to vote for who you believe should feature in the Swansea City Team of the Season so far, on the basis that it was not a decision that should be made by just me!

Many of you voted. Some results were very predictable, some less so. Only one person voted for Tiendalli (I have a suspicion that it was Tiendalli himself).

So, without further babbling, here is who has impressed you the most this season for Swansea City! 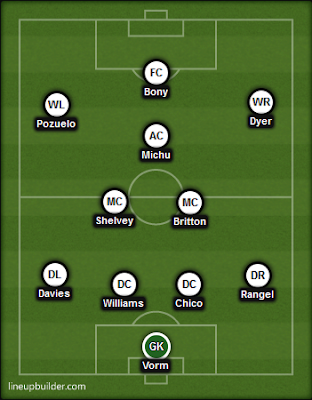 Goalkeeper
Michel Vorm
Although he has suffered injury problems in recent weeks, you voted for Michel Vorm as first choice ahead of Gerhard Tremmel. Despite his mixed form and a few nerve-wracking punches, it's safe to say Vorm is still Swansea's best keeper.

Defence
Ben Davies
First on the list with one of the highest votes is Ben Davies (or Daveeees as one commentator persisted with...). Davies has had his share of blips, but is undoubtedly the best left back Swansea City have. He's also great going forward, scoring two league goals this season.

Angel Rangel
Another emphatic result was Angel Rangel, who you selected as the best right back. Even though Michael Laudrup has overlooked Rangel for Tiendalli at times (an incredible decision) Rangel is probably Swansea's most consistent defender and should always make the team.

Ashley Williams
While the results were less clear-cut for centreback, it should come as no surprise to find captain Ashley Williams makes the list. He's been to blame for a few opposition goals recently and has lost vital possession much more than in previous seasons, but Williams always puts himself on the line and can usually rival most Premier League defenders.

Chico Flores
Finally, you selected Chico Flores to partner Williams in the centre. This is one I don't fully agree with and would have opted for Jordi Amat instead (who was quite close behind in the votes). Chico hasn't impressed me as much this season (especially his acting skills) but - like Williams - he can keep great strikers quiet on a good day. He provides a talking point if nothing else!

Midfield
Jonjo Shelvey
The results clearly show that you choose Jonjo Shelvey as Swansea's best midfield player and I'd have to agree. While he does have his moments of madness, Shelvey is creative going forward and can pick an effective long pass. He also shoots and often scores, which is what Swansea are crying out for when passing becomes tedious. Shelvey will be key in Swansea's European and domestic progress in 2014.

Leon Britton
Next up you picked Leon Britton - the rottweiler in midfield. Okay, less intense than a rottweiler but just as effective. He has seen more time on the bench than he would like this season, but fans are usually crying out for his inclusion. He passes, wins possession and is one of the coolest heads on the field.

Michu
Michu is your final choice of the central midfielders. I prefer him in this attacking midfielder role instead of lone striker. Unfortunately we haven't seen as much of the Michu/Bony partnership as we'd have liked thanks to injuries, but on paper it should be a match made in heaven. Michu's work-rate and goals are his tickets to this team and there is no way he could be left out.

Nathan Dyer
On the wing Nathan Dyer is clearly your first choice. The little man is currently out with a bad ankle injury, but he has been terrorising opposition fullbacks as he has done for the past few years. He's also scored four goals, making him joint top league goalscorer (with Bony) so far this season.

Alejandro Pozuelo
Pozuelo has had moments of brilliance for the Swans even if he is a little unpolished. He's featured in more games than any other player, though he has impressed the most in the Europa League. He has the drive to win the ball and is quick with his feet, and even though much of his talent is better harnessed in an attacking midfield position, he's probably the second most effective winger after Dyer.

Striker
Wilfried Bony
Well... it's not going to be Vasquez is it?! Swansea are a little bare up front when it comes to choice, but Bony is definitely the first choice striker. He's strong and can hold the ball up well even though he hasn't been shooting as much as he perhaps should be. Still, he's top goalscorer in all competitions (with seven goals) and is a key man for the team.

Email ThisBlogThis!Share to TwitterShare to FacebookShare to Pinterest
Labels: Team of the Season

Vote for your Swansea City 'Team of the Season so far' (yes... Tiendalli is on the list)

In seasons gone by it's been pretty easy to predict who is going to start a match for Swansea. However, it's been less obvious this season, mainly because of the heavy squad rotation thanks to the Europa League and the fact that there is an abundance of talent in the Swans squad at the moment (even if they don't always gel as well as they should)!

This talent means we've seen real battles for places across the field. Vorm or Tremmel? Chico or Amat? Davies or Taylor? Hernandez or Routledge? Michu or Bony (or both?)... and don't get me started on the midfield!

So, to help me out with selecting the team of the season, I want you to vote for the players who you think make the best starting eleven. This means those who you think have performed the best in the past few months and those who you'd like to see start the most games in 2014.

The rules of the vote are simple - just pick ELEVEN players (no more or this won't be accurate!) from the list below comprising:

I've decided to be tactical and withhold the results until next week (just after Christmas) where I will announce the team of the season so far based on your votes, with some reasons why.

If I've left any players out then I'm an incompetent boob and you should write your choice under 'other', but I think the main men are all there!

If you want to tell us your reasons why someone should definitely be included in the team (or definitely not) then message us on Facebook or Twitter, or leave a comment below.


ForzaSwansea - The Swansea City Team of the Season (so far...)
Posted by Chris Carra at 17:39 No comments: