Exclusive Sunderland POV: "Ki has been a revelation"

The transfer window is open and Swansea City are desperate for something to freshen up a tired squad. But who exactly are we looking for?

Apart from a goalscoring striker to take the pressure off Bony, we are after someone strong, someone with good feet and someone who can pass the ball. But who?

The answer is actually pretty obvious - Ki Sung Yeung! He's already a Swansea City player, but he's currently on a season-long loan to Sunderland (with a mid-season re-call option, which may prove to be important). 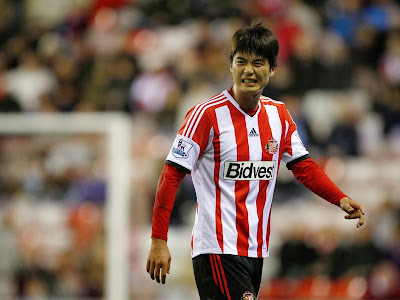 So how has Ki been doing up north? By all accounts very well. But who wants to hear all accounts? We want a concrete answer! So I've recruited David Boyle from the popular Sunderland website The Roker Report to give us the Sunderland perspective on Ki and how effective he's been for the Black Cats:


Ki has, quite simply, been a revelation on Wearside, especially under Gus Poyet. That may that sound like a ridiculous thing to say given Sunderland’s current predicament but Poyet has pretty much set his side up around your man and has given Ki licence to dictate play from the middle of the park with basically every attacking move we make going through the South Korean’s feet first.

It is no secret how Gus Poyet likes his teams to play - very much a style which is especially reminiscent to that of your own which won Swansea many plaudits over recent seasons and given the freedom to play in a central midfield of three, Ki has flourished.

Obviously transfers are a hot topic up and down the country at this time of year and I would not be exaggerating when I say that Ki would be top of my shopping list such is his importance to the side.

Quite whether or not a deal can be agreed either now or in the summer remains to be seen and would ultimately hinge on whether or not the club can beat the drop come May, but either way, we look incapable of playing possession football without Ki in the middle of the park.

Ultimately I fear the Ki situation on Wearside may well play out just like Danny Rose’s loan stint last year where he too caught the eye and won the admiration of the home fans for his superb performances at left-back only to play his way back into contention at White Hart Lane.

Selfishly, I’m desperate to see Ki make his spell with Sunderland a more permanent arrangement, although I could perfectly understand if Swansea were to give their man a second chance given the level of performance he has put in of late.


That's some praise! Perhaps we at Swansea didn't see the potential of Ki when he was sent out on loan, but it seems he's one loan player who would be in our best interests to get back as soon as we can.

A big thanks to David for taking the time to give us his opinions on Ki. You can follow David on Twitter.
Posted by Chris Carra at 17:49