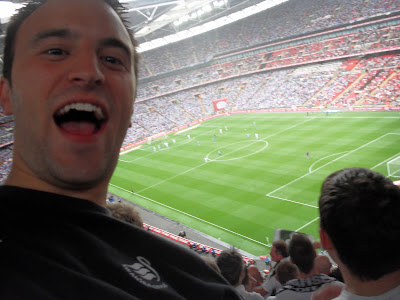 Well it certainly lived up to the hype - a final to remember forever!

For those of you living under a Cardiff-shaped rock for the past 24-hours, Swansea City are in the Premier League after beating Reading 4-2 at Wembley on Monday!

As the teams took to a magnificent Wembley pitch, under the watchful eye of around 86,000 fanatics, everyone will admit that Swansea didn't get off the the dream start.

Reading outplayed them in many aspects, with Dyer and Sinclair struggling to get any meaningful time on the ball, while Alan Tate didn't apply enough pressure to attackers. However, after keeping things level, Swansea took the lead when Sinclair slotted in a penalty on the 21st minute, before adding another goal just a minute later. So after a shaky first quarter, Swansea were well ahead and looked comfortable, playing with their tails up like we have come to expect!

As many of you will know, the travelling supporters were encouraged to begin clapping throughout the 40th minute in memory of Besian Idrizaj. With that in mind it seemed destined that Swansea's third goal would fall on that special minute, thanks to a wonderful volley curled in by Stephan Dobbie – couldn't have written it better myself!

The scenes at half time at the bars were phenomenal; you'd swear Swansea had already lifted the trophy! I guess it was right for the Jacks to be full of confidence and euphoria while enjoying their half-time pint. However, as we took our seats for the second half, the confidence began to dwindle a little as Reading came out swinging.

Playing with a new vigour, they showed why they were also a team just 90 minutes from the Premier League. Their grit was rewarded with two goals in quick succession, both from corners. Joe Allen scored the first (an own goal, though unavoidable really) and the second from the head of Matt Mills.

Panic began to wave through the Swansea crowd, with a lot of the the first-half vocal support turning into silent desperation as the Swans looked to hang on to their once solid lead. Reading almost equalised when Karacan's shot hit the post; a moment where every heart stopped. Superb defending from Garry Monk ensured the resulting rebound was blocked and Alan Tate eventually cleared the ball away from the danger zone.

Had Reading scored then I fear they would've gone on to win it.

Thankfully Fabio Borini was brought down in the box with ten minutes to go, leaving Scott Sinclair to close the door with another well taken penalty.

That was it! Ten minutes later Swansea had won the game! They deserved it! Shouting, chanting, singing, clapping, a trophy, champagne and streamers all followed as Swansea sealed their 2011/12 season in the Premier League.

I will have plenty of blogs with previews on next season, so I won't look too far ahead yet; instead I'll have a little look back over a few things that happened.

Credit must go to Reading: the team and the fans. It was a pleasure to enjoy friendly banter before the match with passing Reading fans, with many shaking hands and having photos with Swans supporters. This couldn't have happened if it was Cardiff, so thank you Reading.

The team were also full of quality and I am sure they will have another good chance of promotion next season. Not many teams would have the courage to come back at the Swans like Reading did, so kudos to the Royals.

Back to the Swans. I applaud every player; from Scott Sinclair and his hat-trick to Garry Monk and his game saving tackle. Alan Tate, who I cursed a few times in the opening stages for being too relaxed, made himself very useful throughout, setting up both Dyer and Borini for the penalties. He may not be able to cope as well in the Premier League, but he'll always go down as a Swansea legend no matter what. Thank you Alan Tate!

Stephan Dobbie was outstanding again, creating the second goal by outpacing Ian Harte (not that hard I guess) and also scoring a beautiful goal himself. Williams and Rangel were pretty solid too, with Britton, Allen, Borini, Gower, Dyer and Pratley giving their all. Even Luke Moore looked full of vigour when he came on!

Dorus de Vries couldn't have done much more than he did to stop the two goals going in, and he saved the Swans several more times throughout. What a keeper to have going into the Premier League.

Brendan Rodgers has turned the team around over the last ten months and has been as, if not more, crucial to promotion than the players. He'll be vital in keeping Swansea City up next season.

A final fact that some might have forgotten (thanks to regular reader Joe Tobin for reminding me); 4-2 was the scoreline that kept Swansea in the football league back in 2003 (beating Hull); a game that also saw a hat-trick and two Swansea penalties! Funny how these things all come together...

So that is officially the season over! Swansea City are back in the top tier! Dyer v Ferdinand, Sinclair v Terry, Allen v Gerrard and Tate v Rooney... it's all coming in the next few months!

I'll be back with more Swansea reaction, theories, news and previews very soon, and throughout the summer as things develop – stay tuned!