Although Swansea didn't take the expected route to qualification from the group, the main thing is we made it! Swansea City are through to the later stages of a European competition for the first time in our history!

The knockout stages await and the Swans have earned a mouthwatering tie against Italian giants Napoli. But how did we get to this stage? ForzaSwansea's newest contributor GAVIN TUCKER is giving us the chance to relive the high (and not-so-high) points of Swansea's Europa League campaign so far.

Drawing Napoli in the last 32 is a fixture that really marks the culmination of Swansea City’s progress over the last decade. The home leg will see Rafa Benitez’s side visit the Liberty on 20th February with the intimidating journey away to Stadio San Paolo on the 27th February.

Napoli is one of the toughest draws we could have had, with some top class players in Jose Callejon, Marek Hamsik and Valon Behrami; it will take a solid performance over two legs and maybe a little luck to see us through. Let's not forget it was not so long ago we beat Chelsea, then champions of Europe, over a two-legged knockout round and we all know how that ended. Just try to push the thought of Dwight Tiendalli facing Gonzalo Higuain to the back of your mind for now at least.

Here's a quick(ish) summary of our adventure so far in Europe and how we got to where we are:

After comfortable wins against Malmo and Petrolul Ploiesti, 4-0 and 6-3 on aggregate respectively, Swansea progressed to the group stage draw. Thanks to a couple of upsets elsewhere the Swans moved up the seeded rankings meaning, in theory at least, a slightly easier group than first expected.
Swansea were drawn straight out of Pot 2 and into Group A with Valencia of Spain (ranked the number one seeded team in the tournament at that stage), followed soon after by St Gallen of Switzerland and Kuban Krasnodar of Russia. The general consensus was that Valencia would be a tough one, but we could, maybe should, qualify from our group. First up a trip to the Mestalla... 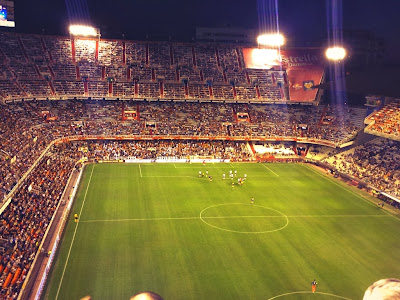 As starts go, it really couldn't have come much better this. Over 2000 Swans supporters, including myself, made the journey for what was to become and will be remembered as one of THE results in our recent history. Valencia had been struggling with league form going into the game, and there was a feeling that with the right performance we could get a positive result from this fixture.

Valencia's Adil Rami was sent off for a ninth-minute professional foul when he hauled down Wilfried Bony - an incident that Swansea took full advantage of. Bony struck first when his right-footed opener went in via a deflection five minutes later. Half time came and the Swans were 1-0 up in the Mestalla.

As the second half resumed, attention was drawn to the home fans (or lack thereof) behind the goal - the Valencia ultras had refused to return to the stands for the second half in protest to the current and recent results from their team. They did eventually return however, just in time to see Michu fire in from eight yards to make it 2-0. Cue away-section mayhem. Jonathan de Guzman curled in a 30-yard free-kick for the third and, to the applause of Valencia fans at full time, Swansea left the field sitting at the top of Group A!

Our first group game at home saw visiting St Gallen bring with them a very respectably sized and noisy away support of around 1500 - oh, and a couple of flares. You can't even smuggle in a bottle of pop into the East stand but St Gallen brought with them a different flavour of European support that we never experience as supporters domestically. 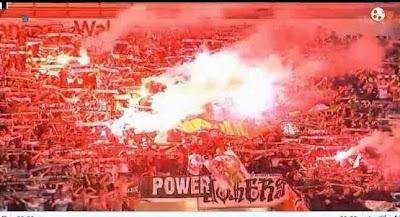 The game will most probably be remembered for the completely inept refereeing of one Duarte Gomes. Having recently been banned from taking control of international matches, he gave bizarre decision after bizarre decision to the point that you stopped being surprised by them towards the end.
Not stopping play in the first half for Michu to receive treatment for a head injury that gushed blood and required stitches at the break was not even the half of it.

St Gallen closed us down well and were very physical in their approach; they were probably unlucky overall not to get something from the game.

Tiendalli was ruled to have handled the ball in the box after 14 minutes, but a weak penalty from Goran Karanovic resulted in a comfortable save by Tremmel. With a few chances early seeing Michu and Jordi Amat both hitting the post, it was not until the second half that Swansea got the breakthrough. In the 52nd minute Wayne Routledge grabbed what proved to be the winner.
Top of Group A, with two games, two wins. We're through already.... right?

Swansea 1-1 Kuban Krasnodar
Our third group game and second home tie brought visitors Kuban Krasnodar to the Liberty and around 50 away fans made the long journey from Russia.

Swansea seemed to lack their usual fluency but finally found a bit of rhythm in the second half with Michu bravely sliding home after latching on to a lovely chip from Alejandro Pozuelo on the 68th minute.

Deep into injury time and 1-0 up we only had to keep possession and see the game out. However, Jonjo Shelvey attempting to take on a Kuban player in injury time saw possession lost. Tremmel brought Balde down in the area and Cisse stepped up to score his sides first goal in the group.
A 93rd minute equaliser - tough to take.

A massive shout has to go to the 50 Swans followers who spent hours deciphering the visa requirements and made the long and expensive journey to support our team in this fixture.

To miss out on a win and a valuable three points to a last gasp goal once is bad enough, but for it to happen twice, within two weeks, against the same team was frustrating to say the least.

A strange night at the Liberty saw Valencia take the victory and secure top place in Group A. Valencia dominated possession and the match had very sedate pace all evening. You could easily be forgiven for thinking you were watching a pre-season friendly.

Fewer than 100 of the Valencia faithful made the trip from Spain to Swansea, and saw their side take the lead as Tremmel's tame punch fell to Juan Barnat outside the box. His shot was deflected into the path of Daniel Parejo.

Swans were left frustrated as Wilfried Bony limped off with an injury only for his replacement Alvaro Vasquez to have a perfectly legitimate equaliser ruled out for offside. 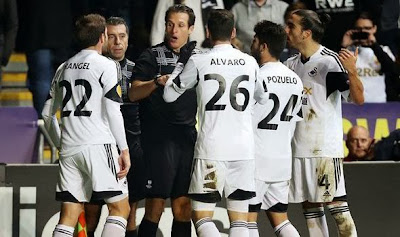 Meanwhile St Gallen were officially out of the competition after losing 4-0 to Kuban Krasnodar. The Russians, however, were mathematically in with a chance of qualification should they beat Valencia at the Mestalla in the final game and Swansea lose to St Gallen while overcoming a goal difference of three. 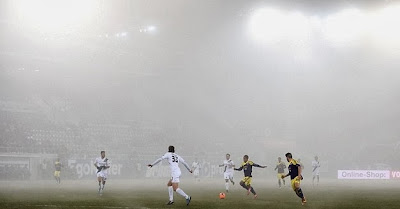 Flight disruption due to fog left the team delayed at Cardiff. When it finally cleared, a further delay due to a technical fault on the place resulted in the team waking up a sleepy Chico from his airport terminal slumber and scheduling a flight from Southend. The team finally arrived in Switzerland, although the training session scheduled for Wednesday evening was cancelled. Not ideal preparation.

The journeys of some supporters were also badly affected and, after numerous flight delays and cancellations, some were forced to abandon their travel plans. A massively frustrating and stressful experience for all involved.

It appeared the fog had followed the team and supporters out to St Gallen. Swans supporters tucked in the corner of the AFG Arena, unable to see the far end of the pitch as play commenced. St Gallen fans were in fine voice again seemingly fuelled by giant pretzels.


The game itself was probably one to forget. The very attack-orientated line up from Laudrup and lack of a holding midfielder saw us ultimately struggle in the centre of the park. Tremmel gave a good performance and were it not for a few superb saves we could have easily seen a bigger loss.

Whether it was complacency after getting six points from the initial two games, the sheer number of team changes game to game, a touch of arrogance or a general lack of effort, we undoubtedly limped over the line into the knockout stages. Still, if you had offered us second in this group before a ball was kicked then I'm sure most would have happily taken it.

Onwards into the knockout rounds once again and a big-time draw against Napoli. No chance for mistakes at this stage and should we progress from this behemoth of a fixture, Swansea will face the winner of Eintacht Frankfurt vs Porto.

The break from Europe between now and February will give the team a chance to narrow their focus back to the Premier League and hopefully improve their form. It's a popular opinion that the Europa League in general disrupts a team’s league performances, with the players being exhausted from the travel, extra games, etc. It's hard to say really with the Swans as we are still in a reasonable league position and have a decent points total.

One thing I believe has impacted us though is the (necessary) heavy rotation of the squad game to game. Two seasons ago it was pretty much the same eleven week in, week out. You knew the line up before it came out. That consistency helped understanding between players. Having to rotate so heavily being in Europe is completely foreign to Swansea (pun intended) but so far I think it's been managed fairly well.

In summary it's a fantastic achievement for Swansea to have qualified for the Europa League and we can be proud of how far we have progressed. It's been an exciting journey and who knows when we may be in European competition again. Whatever happens from here on in we can all be even prouder than usual to be a Jack.