**LATE NOTE: There will be no Sunday morning catch-up or podcast this weekend (8th March) as I am away. I'll be back next week for more irreverent Swansea City action!**


Here we have the fifth episode of the Audio Jacks, Swansea City podcast.

In this episode Chris and Matt discuss the win against Burnley and what it means for Swansea; Matt rants about Scottish football; both discuss the bad boys of Swansea City in the past week; Chris is challenged to an intense quiz; and Matt begins a new Dream Team game.

You can download the podcast to enjoy on your own personal listening device, or just stream from the link below.

All feedback, shares and comments appreciated. Catch us on Twitter - I'm @ForzaSwansea and Matt is at @LMScreamer.

(NOTE: There will be no podcast or Sunday catch-up next weekend as I'm away, but check back again soon for more Swansea City nonsense.)

Here I am again to brighten up your miserable (if the Swansea weather is anything to go by) Monday morning with a brand new episode of the Audio Jacks!

In this episode - which is fully downloadable (sorry I forgot to make it downloadable last week...) - myself and Matt take a look at doing the double over Man United, industrious Swans players of the past, the future of Leon/Rangel's careers, Swansea's changing formation and even have a rant about gambling.

So download or stream, and enjoy - all shares are more than welcome and feedback is gratefully received!

If you want to get in touch with either of us we are both on Twitter. I'm @ForzaSwansea and Matt is at @LMScreamer.

It's another Monday and another Audio Jacks podcast!

In this short episode we discuss the Sunderland game, a controversial post on Planet Swans and we ask why the Liberty Stadium is so quiet these days.

You can stream it by clicking on the link below, or head to the SoundCloud website to download it.

All feedback is very welcome! Catch us on Twitter @ForzaSwansea and @LMScreamer.

The new series of The Audio Jacks - Episode Two

Here's the second episode of the revived Audio Jacks!

In this episode we have a brief summary of the Blackburn match, a rant from Matt about red cards, Chris plays the bizarre transfer window game, and they both take a short look ahead at the Southampton game on Sunday.

Have a listen below. You can also download the episode, if you want to listen to the show while walking, driving or waiting on a bus!

(Note: there's a slight problem with the audio in the first minute or two but it sorts itself out soon after!)

The triumphant return of the Audio Jacks podcast!

Happy Monday to you.

You probably weren't expecting this (and neither was I until a few days ago), but I have a new Audio Jacks podcast for you!

About three years ago myself and Matt Barroccu (an expert Swans fan and broadcaster) created the Audio Jacks - a light-hearted weekly podcast all about Swansea City. However, after a few successful episodes we went our own ways as careers and laziness took over.

But now, a few years later, we have decided to test the water with a comeback podcast. Why? I don't really know. It's a nice way to vent views on the Swans through a different medium to blogging/books, and is something fun for you guys to listen to on the way to work.

Have a listen via the SoundCloud link below and let us know what you think. I'm reachable via the contact form, the comments section, or on Twitter @ForzaSwansea, while you can also reach Matt on @LMScreamer.

In this weeks episode, Chris and Matt reveal some news about the future of this podcast as well as:

- the Swansea City away kit and the lack of design ambition
- transfer market gossip
- your questions from Twitter (including Bodde's return and over ambitious fans)
- and, of course, Challenge Matt!

Enjoy the last in this series of podcasts, we'll be back with a new, improved format in a few weeks! Follow me on Twitter for announcements @ForzaSwansea!

It wouldn't happen in Swansea - Podcast - Episode 6 by ForzaSwansea2
Posted by Chris Carra at 20:08 1 comment:

Email ThisBlogThis!Share to TwitterShare to FacebookShare to Pinterest
Labels: Podcast

Just click play on the big orange button below and enjoy!

- Chris and Matt discuss the ins and outs of the transfer window
- An interview with a Reading fan, who gives his thoughts on the final and Swansea in the Premier League
- A new feature: "Devil's Advocate", where Chris and Matt argue their cases
- All your Twitter questions answered

Unfortunately "Challenge Matt" does not feature due to recording problems (despite me saying it will in the intro!) - sorry, but thanks for your questions, which we shall use next time!

All feedback welcome, and, to decide who should win "Devil's Advocate" just add a comment below. Enjoy!

It wouldn't happen in Swansea - Podcast - Episode 5 by ForzaSwansea
Posted by Chris Carra at 17:25 2 comments:

Just click the big orange button below to play this week's podcast!

NOTE: The original intro is missing as it was never saved, so has been replaced with a short music clip.

In this week's ultra-packed episode, presented by Chris Carra and Matt Barroccu:

- Chris and Matt's Wembley experiences
- "Plastic" fans and the season ticket fiasco
- Who should stay and who should go from the current squad
- Rants from Matt about anti-Welsh journalists
- Chris recaps on the "Smudge1962" incident
- and, of course, 'Challenge Matt'

It wouldn't happen in Swansea - Podcast - Episode 4 by ForzaSwansea
Posted by Chris Carra at 13:19 7 comments:

Matt returns to the studio after his heart operation to discuss the play-offs and more with Chris.

Just click play on the big orange button below and enjoy!

In this packed episode:

- Saturday's win against Sheffield
- Swansea's hopes in the play-offs
- The prospect of a Swansea vs Cardiff final
- "Plastic" fans
- Fabio Borini: will he stay?
- Matt tests Chris with "Who am I?"
- This season's heroes and zeros
- A very frantic Challenge Matt (with another format change)

Here are two photo's to look at while you listen. Don't know which one is which? Chris is the good looking one. Matt is the... the smaller thing with the odd hair. 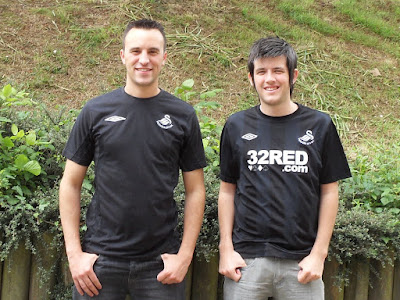 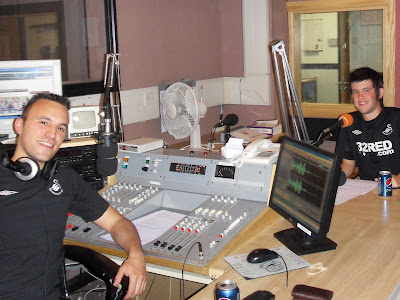 It wouldn't happen in Swansea - Podcast - Episode 3 by ChrisCarra
Posted by Chris Carra at 18:04 6 comments:

Below you'll find the second episode of It wouldn't happen in Swansea..., the podcast for Swans fans, by Swans fans!

This episode contains a discussion of Swansea's game against Nottingham Forest, the question of who should be dropped now Monk is back, a profile of an ex-Swan, Matt's weekly rant, some non-Swans related stories and, of course, Challenge Matt!

As always your feedback and comments are very much appreciated, we are still pretty new to this and a little rough around the edges, but can only get better (hopefully)!

Thanks to everybody who has contributed with questions and comments!


It wouldn't happen in Swansea - Podcast - Episode 2 by ChrisCarra
Posted by Chris Carra at 18:05 5 comments:

In the studio (as far from Hollywood as you can get)!

I've been in the studio today. That makes me sound like some sort of successful actor / producer doesn't it? Maybe, but it is far from the truth! Re-imagine me in Singleton Hospital's radio station studio and you'll realise it's not as glamorous as I first made it sound!

Having been a radio broadcaster for a little while, myself and Matt Barroccu (layabout with an encyclopaedic knowledge of the Swans) decided it may be a good idea to create a podcast, loosely focussing on Swansea City FC.

We've tried a couple of test podcasts over the last few weeks, but we haven't been fully satisfied with them. However, we believe this has been a great learning curve and have a feeling our next format will be the one that works. So, before I say “watch this space”, I would like to ask for some suggestions from my blog readers before we record the next one!

Any ideas you may have for features we could try out on our show, before turning the highlights into a downloadable podcast, would be greatly received. We have a few ourselves, but would love to actually try features that you, the possible listeners, would like to hear. Anything, no matter how obscure! It can be Swans based or not.

Thanks in advance, from me and Chubs Barroccu!
Posted by Chris Carra at 20:25 6 comments: